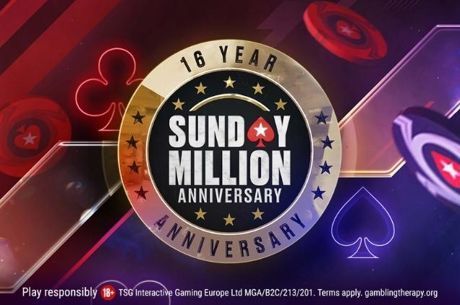 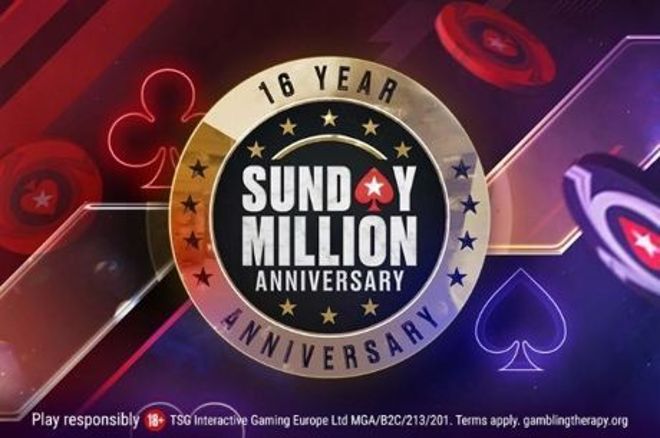 The PokerStars Sunday Million 16th Anniversary event has crowned its champion and German grinder “Blackbeaty” is that champion. The German, who only fired two $215 bullets, left 52,119 opponents in their wake and walked away with an incredible $931,885 after a heads-up deal with Denamrk’s “JanRas1983.”

Blackbeaty increased their online poker lifetime winnings to more than $2.2 million with this massive haul. Their previous largest score weighed in at $74,008, their reward for taking down a $27 buy-in Spring Championship Of Online Poker (SCOOP) event all the way back in May 2012. However, second-placed JanRas1983 enjoyed a far greater ROI thanks to winning their way into this $10 million guaranteed tournament via an $11 buy-in satellite. 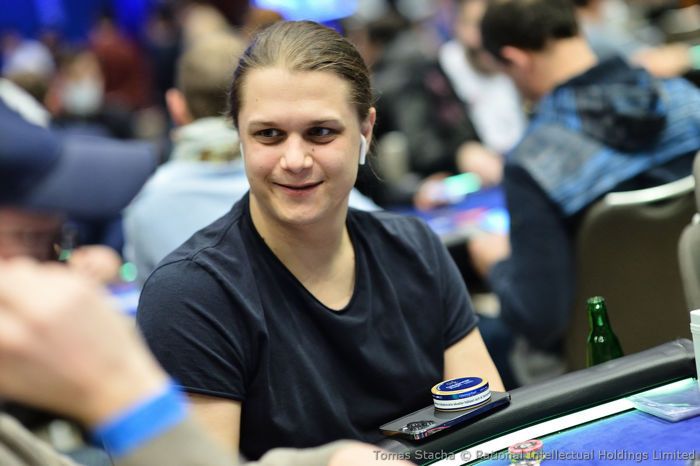 All eyes were on Niklas “Lena900” Astedt when Day 3 shuffled up and dealt. The Swedish legend, one of online poker’s biggest-ever winners, sat down eighth in chips from a field of 38 returning players. However, the aggressive Astedt bowed out in 23rd place, a finish worth $26,128.

The final table was set when “Conckers” of the United Kingdom ran out of steam and fell in tenth place for $65,250. The British player open-shoved from under the gun with ten-nine of clubs for a shade over seven big blinds, and “bamse25” looked them up from the big blind with ace-jack. Conckers flopped a ten but a jack on the river busted them on the final table bubble.

Blackbeaty went into the final table seventh in chips but with a relatively healthy 37 big blind stack. All but one of the finalists would walk away with at least six figures, so nobody wanted to bust in ninth.

“nigelsnuts” was that ninth-place finisher, and they collected $88,528. “Peauker123” min-raised to 8,000,000 from the cutoff with ace-queen, and quickly called when Nigelsnuts three-bet all-in for 56,586,014 in total with the dominated ace-jack. Peauker123’s queen-kicker played, and the surviving eight players were now guaranteed at least $120,108.

Nigelsnuts’ fellow Brazilian “begines1” was the next player out of the door. begines1 open-shoved their last four big blinds into the middle from early position with what turned out to be ace-seven. Blackbeaty called from the big blind with nine-eight. begines1 spiked an ace on the flop but Blackbeaty caught an eight. A nine on the river condemned begines1 to an eighth-place finish.

Seventh-place and $162,955 went to “ajjapasia.” The moved all-in from early position for less than three big blinds with seven-six, and “ChavesVila” called on the button with ace-five suited. The action folded to bames25 in the big blind, who had a pair of queens in the hole, and they squeezed all-in for ten big blinds, which folded out ChavesVila. ajjapasia flopped two pair and looked set for a timely double. That was until a ten landed on the river, pairing the one on the flop, and counterfeiting the all-in player’s hand. Ouch.

bames25 could not put their new chips to much use because they were eliminated in sixth place and collected $221,085. Blackbeaty min-raised to 12,000,000 under the gun, bames25 ripped in their 97,644,144 stack, a bet that was snap-called. bames25 turned over ace-queen, but Blackbeaty revealed pocket aces! The five community cards ran out void of drama, and the final table lost another player.

Brazil’s “EdilsonRTJ” was the final table’s next casualty. The action folded to Peauker123 in the small blind and they raised enough to set EdilsonRTJ all-in for their last six big blinds. EdilsonRTJ called with king-six and was slight ahead of the queen-nine of their opponent. That fact only remained true as far as the flop where Peauker123 paired his nine, which proved enough to reduce the player count by one. EdilsonRTJ walked away with $299,952 to show for their efforts.

A cool $406,954 went to the fourth-place finisher, Peauker123. They first doubled-up ChavesVila in a battle of the blinds, before getting their remaining 24 big blinds in against Blackbeaty. The latter raised twice the size of the big blind to 16,000,000 from under the gun, Peauker123 made it 80,000,000 to go from the button before calling off the 109,787,128 chips they had behind when Blackbeaty shoved on them. It was pocket jacks for Blackbeaty against the ace-jack of Peauker123. Neither player improved on the board, but Blackbeaty did not need to. Game over for Peauker123.

Heads-up was set when the short-stacked ChavesVila crashed and burned in third, a finish that saw $552,126 head to their PokerStars account. ChavesVila asked to look at a possible deal just before they busted but a deal was not even considered. They busted when Blackbeaty shoved from the small blind with pocket sevens, and ChavesVila called with pocket nines for their last 6.5 big blinds. The board ran out with four spades with Blackbeaty holding a spade.

How to Make a Deal in a Poker Tournament: ICM, Chip Chop, and More

Blackbeaty went into heads-up holding more than 1.5 times as many chips as JanRas1983. The pair played one hand before decided to look at a potential deal. Those negotiations bore fruit almost instantly and play resumed.