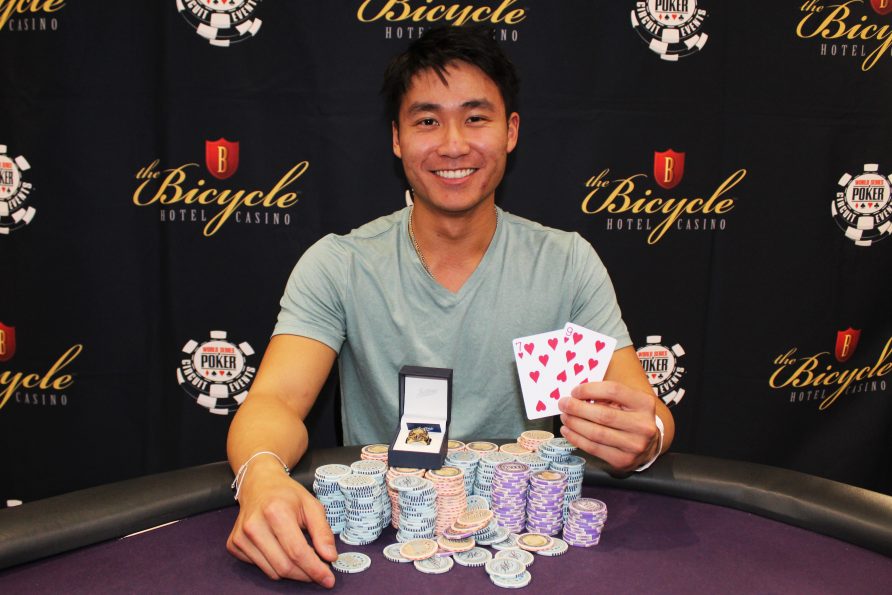 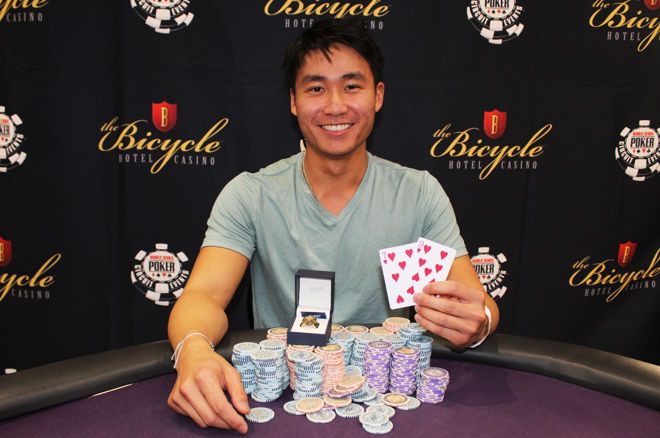 Ethan “Rampage” Yau unsuccessfully executed a $45,000 river bluff against Garrett Adelstein on a recent Hustler Casino Live stream, and lost nearly six figures during the session. But he’s already won much of it back over the past week in various tournaments.

Yau, who last October won the MSPT Venetian $1,100 Main Event for $230,379, took down WSOP Circuit Event #12: $2,200 High Roller No-Limit Hold’em at the Bicycle Casino in Los Angeles for $49,530 last Wednesday to start off his comeback. He beat out 80 entrants to earn his third Circuit ring since December. That’s the good news for him. Here’s the bad news:

Now I’m only down 5 figures this week 🙂

On Friday, “Rampage” competed on Hustler Casino Live in a $50/$100/$200 game, the biggest stakes of his career. He bought in for $100,000 before adding on another $50,000 later in the show. Some of Yau’s Twitter followers were critical of him for shot taking at such high stakes.

Things didn’t exactly go his way during the lengthy session, however. He lost a sizeable pot to Adelstein, who appeared on High Stakes Poker earlier this week, when

. But the most memorable, and costly, hand of the evening came at the end against the same player.

. Both players took a flop, which came

. “G-Man” decided to check and let his opponent bet, which he did for $6,500, a fairly large bet on a wet board. Adelstein called and they saw the

appear on the turn, quite the juicy card for both players.

The action again checked to “Rampage,” who semi-bluffed with his flush draw for $16,000. That wasn’t going to scare away his opponent, who turned a straight. Adelstein just called and then saw the board pair on the river —

For a third time, Adelstein played it safe and checked it back to the aggressive player. Yau had missed his flush draw and just couldn’t let the $56,000 pot go without a fight. So, he fired out a massive bluff of $45,000. Adelstein took a minute to ponder his move. In the end, despite the board being paired, his hand was simply too strong to fold.

Yau lost the pot and $93,000 overall for the day, the biggest losing session of his poker career, and he did so in front of Hustler Casino Live’s massive live-stream audience.

Although “Rampage,” whose YouTube channel has over 136,000 subscribers, took one on the chin at Hustler Casino, he got a chunk of it back Wednesday night, and then some more on Sunday.

Yau was the winner of the $2,200 buy-in WSOP Circuit event at The Bike, and received $49,530, basically just enough to get his river bet against Adelstein back. The poker vlogger defeated David Van Reyk, who only had one previous cash in a WSOP or WSOP Circuit event, heads-up to win the ring. Maria Ho also cashed in the event, an 11th place finish for $3,495.

Then on Sunday, he took down a $320 buy-in no-limit hold’em tournament on WSOP.com for $27,984 for another gold ring, the third of his career to go along with his gold bracelet from the 2020 WSOP. He’s made quite the comeback since the rough session on Hustler Casino Live.

Yau also won a WSOP Circuit ring on March 1 ($2,000 No-Limit Hold’em Super High Roller for $53,096) playing on WSOP.com while attending a Vegas Golden Knights hockey game. He vlogged the win as he sat and watched the Knights defeat the San Jose Sharks at T-Mobile Arena in Las Vegas.

Find out how Ethan Yau is crushing the content space here!