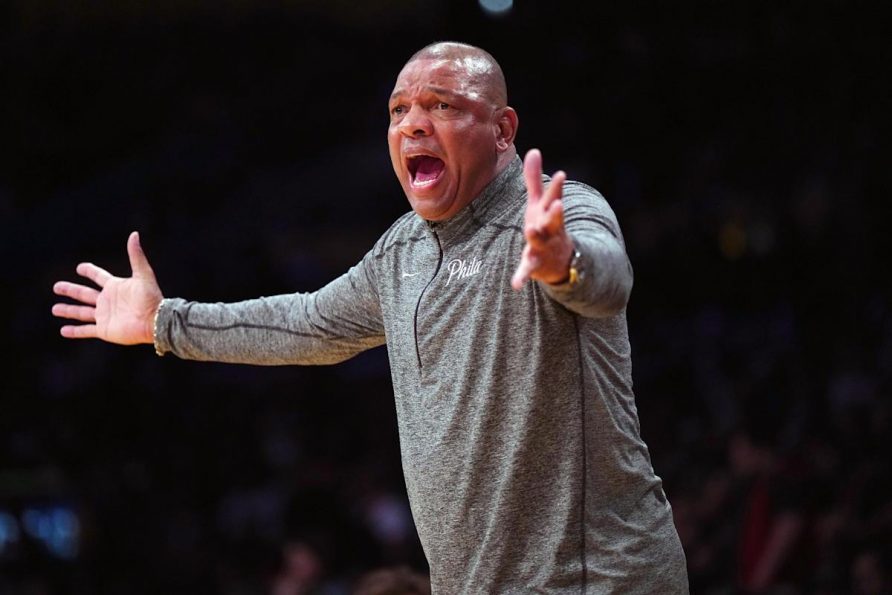 In the latest batch of NBA coaching rumors, Doc Rivers — the current head coach of the Philadelphia 76ers — could leave the City of Brotherly Love and head out west to become the next head coach of the Utah Jazz or Los Angeles Lakers. 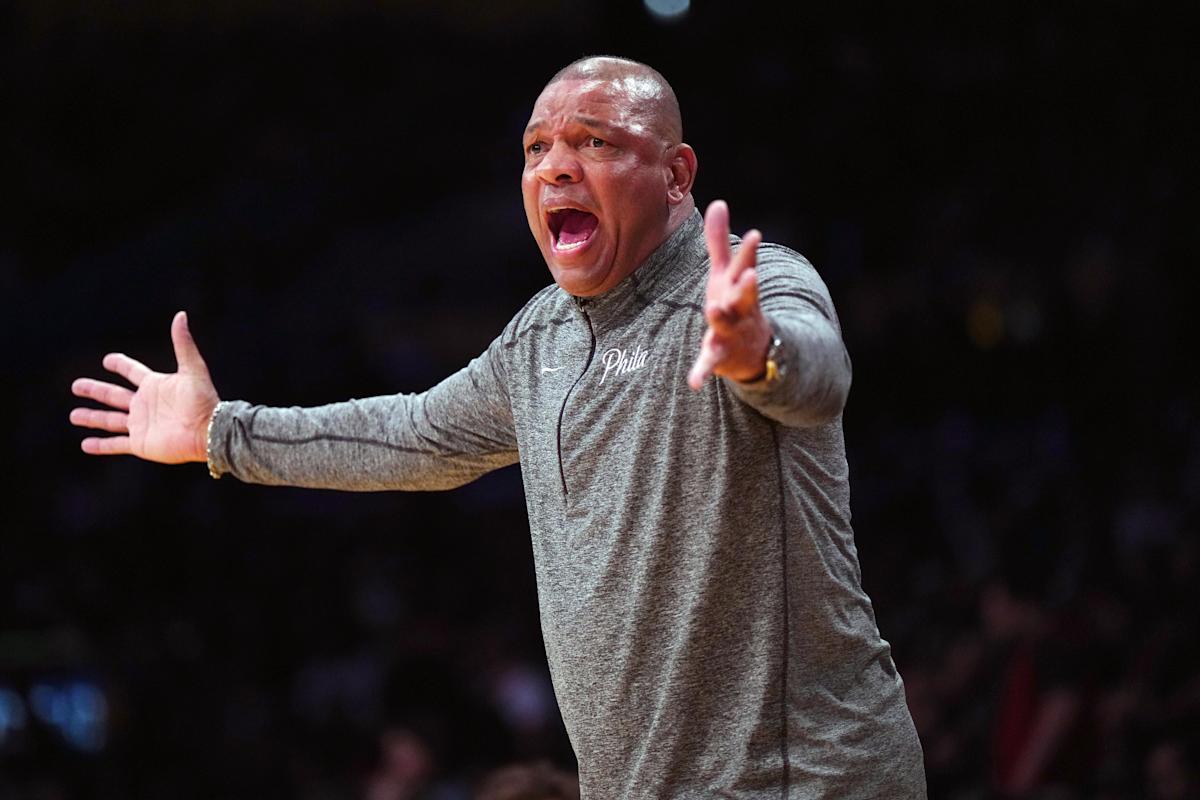 Doc Rivers, head coach of the Philadelphia 76ers, argues a call with an official during a recent home game at the Wells Fargo Center. (Image: Patricia Reilly/Getty)

The NBA coaching carousel could start spinning with the San Antonio Spurs. Gregg ‘Pops’ Popovich from the Spurs recently broke the record for most head coaching wins in NBA history. The longest-tenured coach in the NBA could retire at the end of this season and accept a position in the front office, which would leave a head coaching vacancy in San Antonio.

If Popovich retires, Quin Snyder from the Utah Jazz is on the top of the short list of candidates to replace Pops.

Snyder currently coaches the Jazz, but he’s rumored to become the next head coach of the Spurs or Lakers. It’s crazy to think because he was close to winning NBA Coach of the Year last season with the Jazz.

Heading into this season, the Jazz embarked on an NBA Finals or bust mission, which started out on a positive note, but the team descended into chaos. The second half of the Jazz’s season has been an utter disappointment due to injuries and terrible chemistry.

The soon-to-be implosion and gutting of the team is imminent due discord in the locker room. Donovan Mitchell and most of the Jazz have grown weary of Rudy Gobert, which could result in the team trading Gobert or Mitchell, or both.

If that’s the case, then Snyder would jump ship and seek employment elsewhere. If Popovich retires, he could become the next head coach of the San Antonio Spurs. Otherwise, there’s always the LA Lakers.

The LA Lakers are a shitshow this season due to multiple injuries to Anthony Davis and the simple fact that the Russell Westbrook trade backfired. LeBron James and Davis both lobbied heavily to bring in Westbrook, even though they had to part with several key role players and everyone knew it would be a disaster.

As expected, Westbrook failed to gel with his new team, and the Lakers went off the rails. Throw in multiple injuries to Davis (knee, ankle, foot), and it’s been ugly in Tinsel Town. HBO recently released a series about the 1980s Showtime Lakers titled “Winning Time”, but many fans are trolling the current batch of the Lakers by referring to them as “Losing Time.”

Sadly, head coach Frank Vogel will become the scapegoat for the Lakers’ dismal season. He’s expected to get fired as early as next Monday.

The front office and general manager Rob Pelinka will not accept responsibility for the initial Westbrook trade. The powerful LeBron, who’s known in many circles as the shadow GM for the purple and gold, won’t accept the blame for pushing forth the Westbrook deal. LeBron was livid that Pelinka was unable to trade Westbrook before the deadline because he makes too much money with a max-contract, and nobody wanted him. So, that means Vogel will become the ultimate scapegoat for this season.

In the last few weeks, Snyder’s name has come up as a possible replacement for Vogel. However, in the last 24 hours, a new name has surfaced: Doc Rivers.

Rivers has ties in LA after he guided the LA Clippers to the playoffs six times in seven seasons. He could never get over the dreaded Clippers Curse, and they were knocked out in the Western Conference Semifinals four times during his reign.

Rivers parted ways with the Clippers after the 2020 season, and he joined the Philadelphia 76ers last season. The 76ers won the Atlantic division in 2021, but shat the bed in the playoffs after Ben Simmons disappeared due to his aversion to shooting free throws and taking shots in crunch time. The incident created bad blood between Simmons and Rivers, Simmons and the 76ers, and Simmons and the entire city of Philadelphia.

Rivers endured all the Simmons drama after he demanded a trade and sat out the whole season. The 76ers finally traded Simmons on the morning of the trade deadline, and shipped Simmons to Brooklyn Nets in exchange for James Harden.

Apparently, Rivers did not want Harden and preferred the team to trade Simmons elsewhere. However, general manager Daryl Morey wanted to reunite with Harden after the two spent time together with the Houston Rockets.

Unless the 76ers win a championship, Rivers is expected to bolt from the 76ers and return to the Western Conference next season with either the Utah Jazz or LA Lakers.

Rivers won a championship as a head coach of the Boston Celtics in 2008 with Danny Ainge as their general manager. Ainge, who is the current CEO and president of the Jazz, could entice Rivers to help rebuild the Jazz after their reconfiguration in the offseason.

Of course, that’s only if Snyder leaves the Jazz to coach the Lakers or Spurs. If Snyder stays in Utah, then Rivers could become the next head coach of the Lakers.