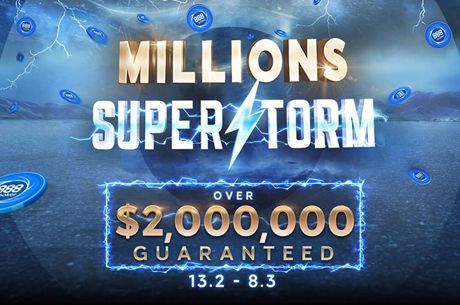 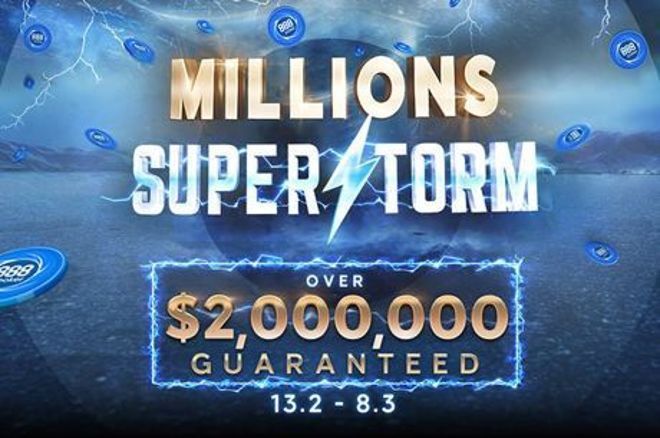 It took less than two hours for “ddaubar” to emerge the winner of the 2022 888Poker Millions Superstorm Main Event for $180,000. They had to battle through 999 Day 1 entries, and 166 returning players on Day 2 to make the final day when they still had 8 other players to get through for the biggest share of the $1 million prize pool.

It turned out that the top two stacks to start the day also ended up as the last two players standing. “james12627” was heads-up against “ddaubar” at the endgame, and the only thing that changed from the start of the day was that the two players switched their start-of-day positions around.

They fell just shy of the guarantee when a total of 999 entries were recorded across all the Day 1 opening flights. That was made up of 913 players with 86 total rebuys, but only 166 of those entries managed to keep their stack through the first 18 levels.

They came back for Day 2 on March 7th and played down to a final table in about 3.5 hours. Along the way, three members of the 888poker team booked cashing finishes. Dominik “888Dominik” Nitsche grabbed a minimum cash, while Sam “888samantha” Abernathy managed to ladder up to $2,200. Micro-stakes streamer Dave “New_Dave” Gibson had the best score of the team though, finishing 81st for a score of $2,500. Given his usual stakes, it was no doubt a huge add for his bankroll.

Each of the nine finalists locked in a score of at least $12,500, with the top two finishers seeing a six-figure sum hit their 888poker account.

888poker regular “wellyxx” was the first of the nine final table members to fall by the wayside. They were joined on the rail first by “Streuzalz” then by “DosPoochies” and the seasoned grinder Sebastian “p000cket000” Sikoarski.

Fifth-place and a $50,400 score went to “Beat_You_Bad” who lost a coinflip with ace-ten versus the pocket eights of “james12627”. A short-stacked “GranaPadano” then fell at the hands of the eventual champion, with “Jan.14” busting to james12627 when their ace-eight failed to get their against pocket kings.

The early heads-up confrontations went ddaubar’s way and they found a better kicker in the final hand of the tournament. james12627 walked away with the $130,000 consolation prize while ddaubar got their hands on the $180,000 top prize.

That brings PokerNews’ coverage of the 2022 888Poker Millions Superstorm to a close. Good luck on the felt.