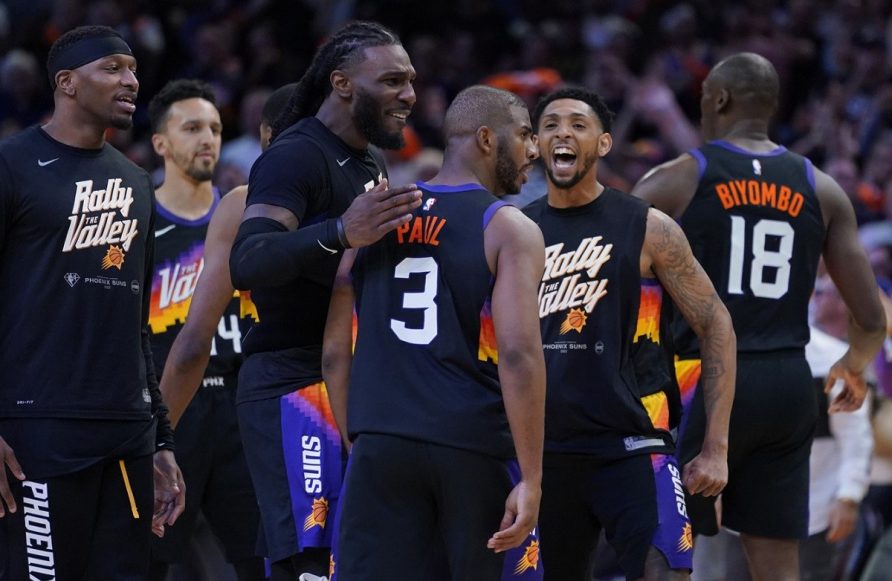 The top-seeded Miami Heat hold a 2-0 lead and are -800 odds to win the NBA Eastern Conference Semifinals series against the Philadelphia 76ers. Meanwhile, #1 Phoenix Suns — the best team in the NBA this season — jumped out to a 2-0 series against the Dallas Mavs, and the Suns are a huge favorite at -1000 odds to win their Western Conference Semifinals matchup. 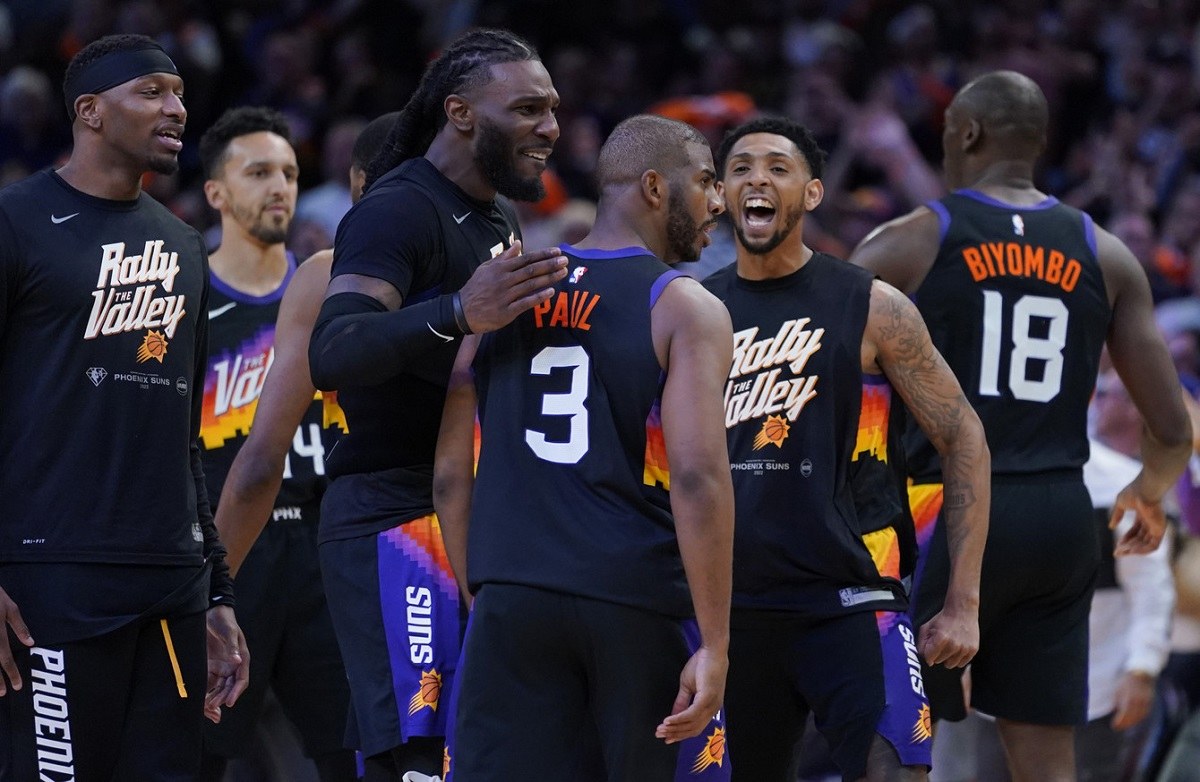 Members of the Phoenix Suns congratulate Chris Paul after he lit up the Dallas Mavs and tormented Luka Doncic in a Game 2 victory. (Image: Getty)

On the other sides of the conference semis brackets, both of those series are tied at 1-1. The defending champion Milwaukee Bucks and Boston Celtics are tied 1-1 in their Eastern Conference Semifinal, but the Celtics are the betting favorite at -135 odds to win the series, while the Bucks find themselves underdogs at+ 115.

Meanwhile, the Golden State Warriors and Memphis Grizzlies are deadlocked at 1-1 each in the Western Conference Semifinals. The Warriors are -290 favorites to win the series with Game 3 and Game 4 hosted in San Francisco.

Both of these teams have injuries to key starters, but the Miami Heat are much deeper and seemed unfazed. The Heat won two games at home and built a comfortable 2-0 series lead without point guard Kyle Lowry (hamstring). The Heat are just two wins away from returning to the Eastern Conference Finals for a second time in the last three seasons. You can back the Heat at -800 odds to knock out the 76ers, where the Heat are the second-biggest overall favorite on the NBA series betting board at DraftKings.

The 76ers looked utterly lost with Joel Embiid, who missed the first two games with an orbital fracture and concussion. The 76ers hinted he could return as early as Game 3 when the series moves to Philadelphia. At this point, the 76ers are in an 0-2 hole and need all the help they can get. The 76ers are a big underdog at +500 odds to pull off a miraculous comeback.

The Milwaukee Bucks — playing without starting small forward Khris Middleton — stunned the Boston Celtics with a huge road win in Game 1 thanks to a triple-double from the Greek Freak. Despite falling behind 0-1 and not having starting point guard Marcus Smart, the Celtics won Game 2 to even the series. The Celtics were fired up from the opening tip, while the Bucks were ice cold shooting wise.

The Bucks host Game 3 and Game 4 in Milwaukee and look to pull ahead of the Celtics and regain the series lead. This Eastern Conference Semifinals matchup is the closest series according to the series market at DraftKings. The Bucks are a slight underdog at +115 odds to win the series and return to the Eastern Conference Finals. The Celtics are the favorite at -135 odds, and they hope Smart will be able to suit up for Game 3 on Saturday.

The Phoenix Suns are the biggest favorite on the NBA series betting board right now at -1000 odds to defeat the Mavs in the Western Conference Semifinals. The Suns seized a 2-0 lead after winning the first two games at home. Devin Booker looked great despite missing a couple of games in the first round with a hamstring injury.

The series heads to the heart of Texas with Game 3 and Game 4 in Dallas, but the Mavs are in deep trouble. Luka Doncic averaged 40 points, 8.5 rebounds, and 7.5 assists per game against the Suns, but the rest of the Mavs forgot to show up. Jalen Brunson averaged just 11 ppg against the Suns after lighting up the Jazz for 27.8 ppg in the first round. Spencer Dinwiddie struggled as well averaging only 9.5 ppg against the Suns.

The Mavs – especially Doncic – are getting crushed on defense. Chris Paul and the Suns have been surgically exploiting Doncic’s defensive liabilities by attacking him with screens and pick-and-rolls. He looked gassed in the fourth quarter of both games because he’s been carrying the entire offensive load. Let’s not forget the Slovenian Wunderkind also missed two games at the start of the postseason with a calf injury and he’s not playing at 100%. Oddsmakers do not have much faith in the Mavs at +800 odds to win the series after falling into a 0-2 hole.

The Golden State Warriors and Memphis Grizzlies are playing a physical series that feels more like a throwback to the rough and tumble 1990s with the New York Knicks and Miami Heat beating the crap out of each other. With the series tied at 1-1, the Warriors are the favorite to advance to the Western Conference Finals at -290 odds with the next two games at home in San Francisco.

The Warriors have yet to figure out how to slow down the effervescent Ja Morant. He torched them for 47 points in Game 2 to help the Grizzlies tie the series at 1-1. The Grizzlies are +235 odds to knock out the Warriors, but they’re looking to steal a win on the road this weekend.

The Warriors also lost Gary Payton II for at least a month with a fractured left elbow, which also has some ligament damage, after a cheap foul from Dillon Brooks at the start of Game 2.

The Warriors will rely on their “Death Lineup” the next two games to regain control of the series. Klay Thompson struggled to find a shooting groove against the Grizzlies. He averaged just 13.5 ppg against the Grizzlies, which is nearly seven points below his season average, and nine points off from his first-round numbers against the Denver Nuggets. Thompson is bogged down in a shooting slump while connecting on just 29% of all shots and 23.4% of his 3-pointers.