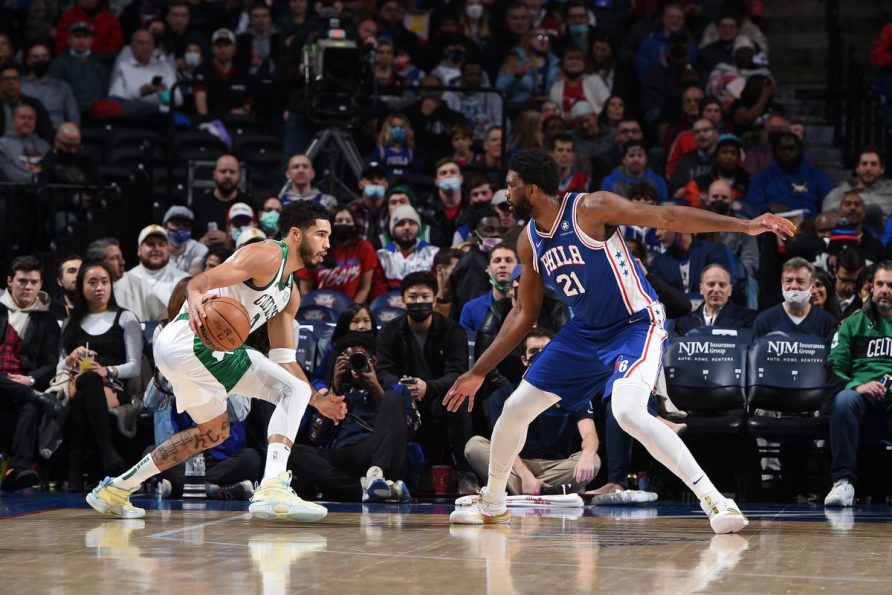 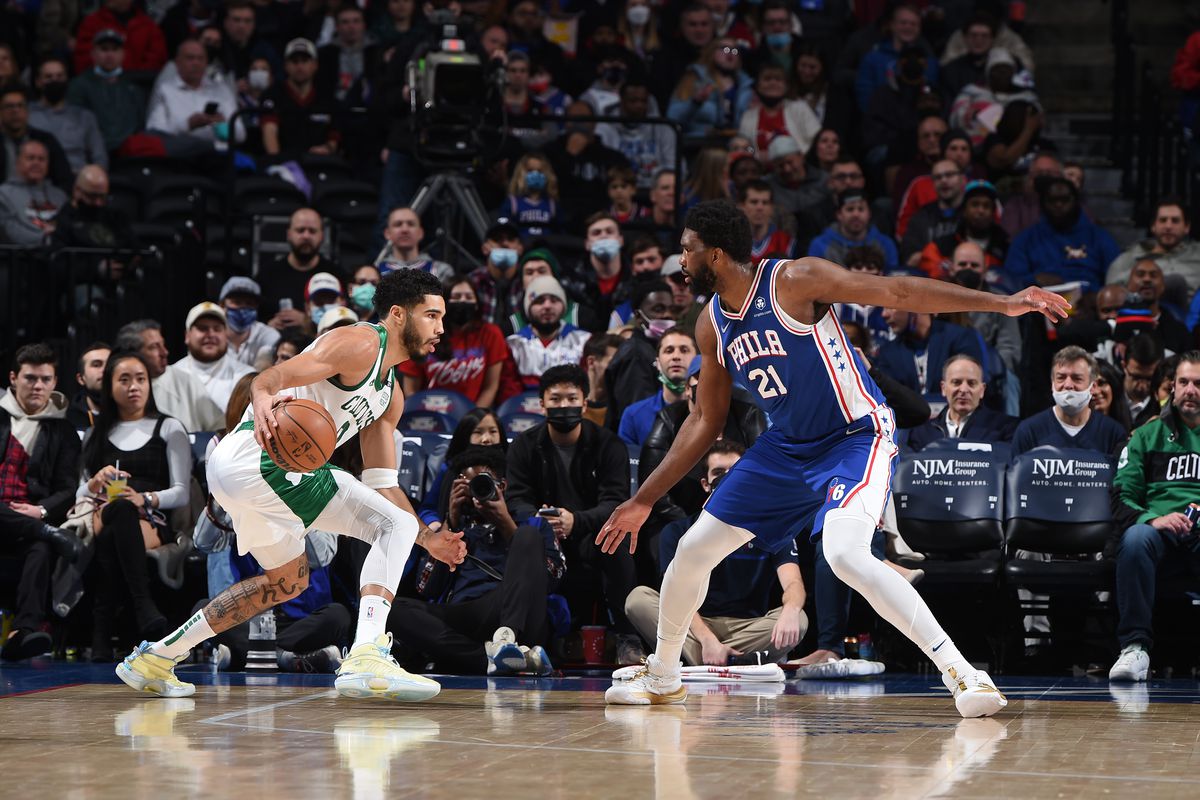 Jayson Tatum from the Boston Celtics makes a move on Joel Embiid from the Philadelphia 76ers. (Image: Getty)

The entire NBA is wondering where the Nets will trade Durant, but the teams in the Atlantic Division are keeping a very close eye on the drama because it could alter the entire landscape of the division and Eastern Conference. The Toronto Raptors and Boston Celtics are leading candidates to land Durant in a trade, which would be weird if the Nets traded the All-Star to an Atlantic Divisional rival.

The Boston Celtics are the latest team to get involved in a potential trade for Durant, but would they be willing to break up a squad that won the Eastern Conference and was the runner-up to the Golden State Warriors?

The Celtics were one of the favorites to win the 2023 NBA championship before the Durant trade talks. In the last few days, the Celtics saw their championship odds move from +550 to +450.

The Celtics would have to part ways with at least Jaylen Brown and a couple of role players if they want to land Durant in a mega trade. The Nets want Brown and Marcus Smart plus draft picks, but the Celtic rejected their offer to give up their starting backcourt for Durant. Negotiations continue, but the futures market has been very active based on Durant trade rumors.

At least the Celtics will not ride or die with Durant. They could (and probably should) run it back next season with the same squad plus a couple of much-needed additions. The Celtics bolstered their bench with Malcolm Brogdon and Danilo Gallinari. Head coach Ime Udoka will rely on those veterans to provide stability in the postseason and not commit turnovers in crunch time. Brogdon was also a nice hedge if they Celtics were to acquire Durant because then he could slide into the starting lineup to replace Brown.

James Harden took a $15 million pay cut so the Philadelphia 76ers had wiggle room to sign veterans to balance out the roster. General manager Daryl Morey used to work for the Houston Rockets, where Harden also thrived. Morey and Harden have been slowly adding his former teammates in Houston to help turn the current 76ers into a legit championship threat. Joel Embiid is wicked pissed he did not win the MVP last season. He was the runner up in one of the closest races in two decades, but he’ll come into next season on a mission to win it all.

The 76ers are +270 odds to win the Atlantic Division, and they might not be as good as the Celtics, but they will at least make sure the Celtics do not runaway with the divisional crown.

The Brooklyn Nets have to navigate potential trades for both Durant and Kyrie Irving. Multiple teams want Durant, but there’s a limited market for Irving. The Nets are in no rush to trade either All-Star, so there’s a good chance they begin the regular season with both players in the starting lineup.

There’s also the Ben Simmons drama. He did not play for the Nets after a trade with the Philly 76ers due to mental health issues. As soon as he was in the proper head space to start practicing, Simmons tweaked his back and underwent surgery. Who knows is Simmons actually worked on his free throws and outside shooting during his lengthy hiatus. If the Nets want to trade Durant to the Miami Heat in exchange for Bam Adebayo, they’ll have to also trade Simmons. It’s just a messy situation for the Nets, yet they’re still only +500 odds to win the division for the first time since relocating from New Jersey to Brooklyn.

The Toronto Raptors could be an ideal value pick to win the Atlantic Division at +800 odds if you think they’ll add Durant in a trade. If the Raptors stand pat, then they’ll be fighting for a spot in the Play-In Tournament while the Celtics and 76ers slug it out for the Atlantic Division crown. The Raptors also have to figure out what to do with our favorite player OG Anunoby, who requested a trade because he wanted to be more involved in the offense. He saw his role diminish after the Raptors selected Scottie Barnes in the 2021 NBA Draft. Barnes went on to win Rookie of the Year, so expect him to get the ball even more.

The New York Knicks made several interesting moves this offseason, but they’re not done yet. The Knicks upgraded their point guard position by signing Jalen Brunson from the Dallas Mavs. They traded the #11 pick in the draft to the Oklahoma City Thunder for three picks, which they hope to use in a future trade with the Utah Jazz for Donovan Mitchell. However, the Jazz want six first-round picks and two or three young role players in exchange for Mitchell, so the trade talk cooled down. Even if the Knicks end up with Mitchell, they’re still not in the same league as the Celtics or 76ers. So, save your money and avoid betting the Knicks at +2000 odds to win the Atlantic Division.