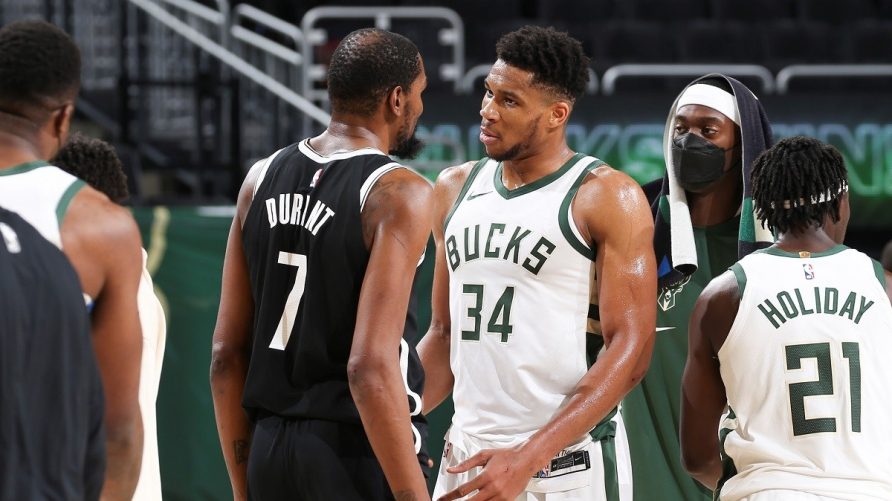 The Milwaukee Bucks, the defending NBA champions, are the betting favorites at +250 odds to win the 2022 NBA Eastern Conference title in back-to-back seasons, but the Brooklyn Nets are not far behind at +350 odds. 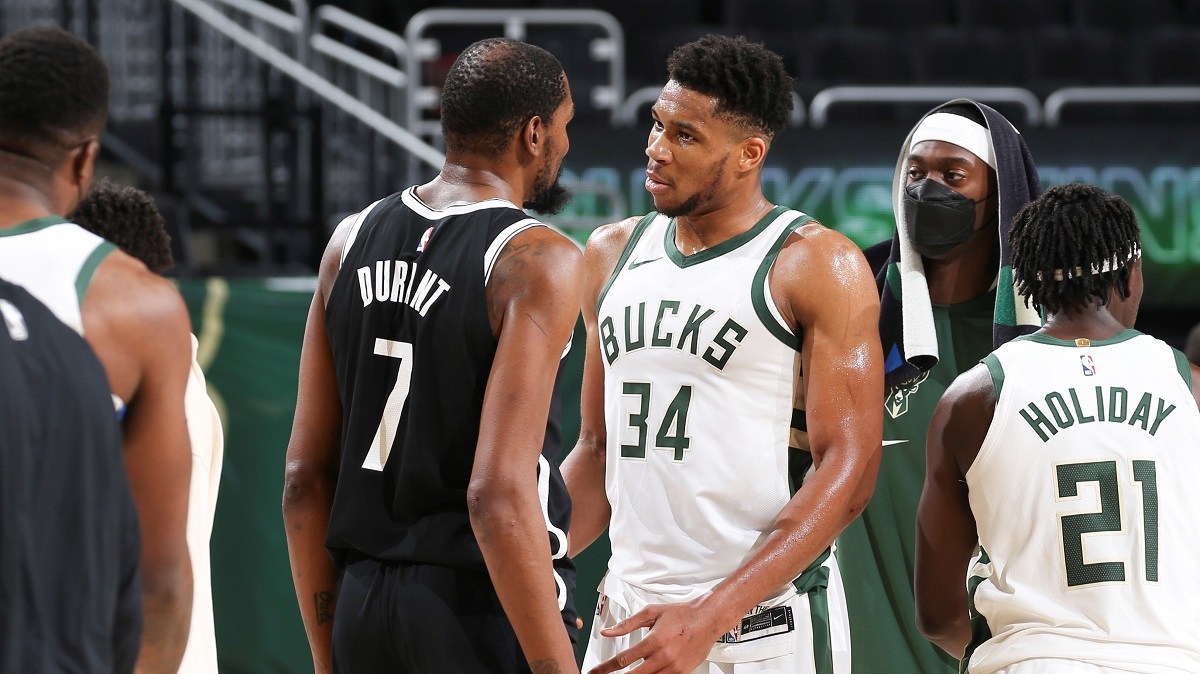 The Bucks head into the 2022 NBA playoffs with the #3 seed in the Eastern Conference, but the Brooklyn Nets are not seeded… yet. The Nets participate in the Play-In Tournament tonight with the #7 and #8 seed still to be determined.

The Bucks knocked the Nets out of the 2021 playoffs during an exciting seven-game series in the Eastern Conference semifinals. There’s a good chance the Bucks and Nets meet in the semifinals once again.

The Phoenix Suns are the favorite to win the 2022 NBA championship at +260 odds according to DraftKings. The Bucks are second on the future board at +500 odds, followed by the Nets at +600 odds.

At the start of the 2019 and 2020 playoffs, the Bucks posted the best record in the NBA, but those failed to advance to the NBA Finals. In 2021, the Bucks ran the table with the #3 seed and held off the banged-up Brooklyn Nets in seven games to win the Eastern Conference crown. Even without James Harden or Kyrie Irving, Kevin Durant almost beat the Bucks by himself.

This season, the Bucks are the team to beat in a wide-open Eastern Conference. Four other teams have a good shot at wrestling away the defending conference crown from the Bucks.

The Bucks meet the #6 Chicago Bulls in the first round of the playoffs. The Bucks are on the upswing, while the Bulls are on the downswing.

In the second round or the Eastern Conference Semifinals, the Bucks could meet the #2 Boston Celtics, or the Nets if they secure the #7 seed and pick off the Celtics in the opening round.

You can back the Bucks at +250 odds to win the Eastern Conference for a second season in a row. We like their chances because the Bucks would like to establish themselves as a dynasty and not a one-hit wonder champ. You can’t have a dynasty without multiple championships.

The Nets finished the regular season in seventh place, but host the Cleveland Cavs in the Eastern Conference Play-In Tournament to determine the #7 seed. If the Nets lose, they could still qualify for the postseason as the #8 seed if they defeat the winner of the Atlanta Hawks and Charlotte Hornets.

Wherever the Nets get seeded, they’ll be a dangerous #7 or #8 seed. The Miami Heat await as the #1 seed, but it’s more likely they square off against the #2 Celtics in the first round.

There’s a small chance that Ben Simmons joins the Nets in the first round. He has not made his debut with the Nets since joining them at the trade deadline.

The Boston Celtics seek their first Eastern Conference championship in a over decade. They last won in 2010, but lost the NBA championship to Kobe Bryant and the LA Lakers in the 2010 NBA Finals.

The Celtics were the hottest team in the NBA in the second half of the season with a 33-10 record. The Celtics are a tough opponent because of their stifling defense that allowed a league-low 104.5 ppg. They also have a stone-cold killer with Jayson Tatum, who can exploded for 40-plus in a playoff game. The Celtics lost the versatile Robert Williams III to a knee injury, and they’ll miss him the most if they meet the Bucks in the semifinals.

The Celtics, with the #2 seed, also have a potential headache on their hands if the Nets lock up the #7 seed. If the RW3-less Celtics draw the Nets and defeat them, then there’s a strong possibility they can win the conference title to return to the NBA Finals for the first time in 12 seasons. The Celtics are +425 odds to win the Eastern Conference.

The Miami Heat provide the best value at +425 odds because they’re the #1 seed in the Eastern Conference, yet the public loves the Bucks or Nets, and not backing the Heat despite posting the best record in the conference at 53-29.

Bam Adebayo missed a portion of the season with a thumb injury, but he’s still a beast averaging 19.1 points and 10.1 rebounds per game. Tyler Herro (20.7 ppg) provides instant offense off the bench as the Sixth Man of the Year, and he’s the team’s second-best scorer behind Jimmy Butler (21.4 pgg).

The Heat added veteran point guard Kyle Lowry (13.4 ppg, 8.4 assists) in the offseason to help them provide them with an experienced two-way player in the playoffs.

The Philadelphia 76ers were the top team in the Eastern Conference last season, but were eliminated from the postseason by the #5 Atlanta Hawks in the semifinals. It took seven games, but Trae Young and the Hawks upset the #1 76ers. Ben Simmons disappeared in crunch time and some of his actions were the reason why the 76ers imploded.

An ugly rift between Simmons and the 76ers ensued. He demanded a trade in the offseason, but the 76ers were unable to find a trade partner that was willing to part with their hefty asking price. Simmons sat out the first half of the 2021-22 season before the 76ers traded him on the morning of the trade deadline to the Brooklyn Nets in exchange for James Harden.

The 76ers vastly improved their offense with Harden, but he’s an inferior defender compared to Simmons. Opposing teams will exploit Harden’s soft defense, but they hope he can make up for his lackluster defensive with additional firepower on offense.

Joel Embiid was in a super tight race for MVP with Nikola Jokic. Embiid is playing the best ball of his career right now and won the scoring title, but we’re curious to see what kind of playoff team the 76ers are with Harden. The 76ers begin the postseason as the #4 seed and a first-round matchup against the Toronto Raptors. The 76ers are +450 odds to win the Eastern Conference for the first time since 2001.