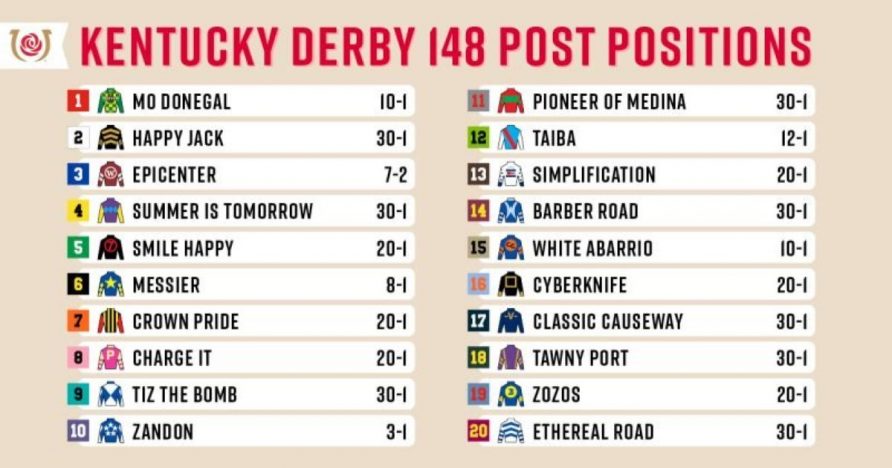 Neither Chad Brown, nor Steve Asmussen, have a Kentucky Derby on their considerable resumes. They’re a combined 0-for-30 in America’s most followed race. But both saddle the two morning line favorites: 3/1 Zandon and 7/2 Epicenter, for Saturday’s 148th Kentucky Derby at Churchill Downs. 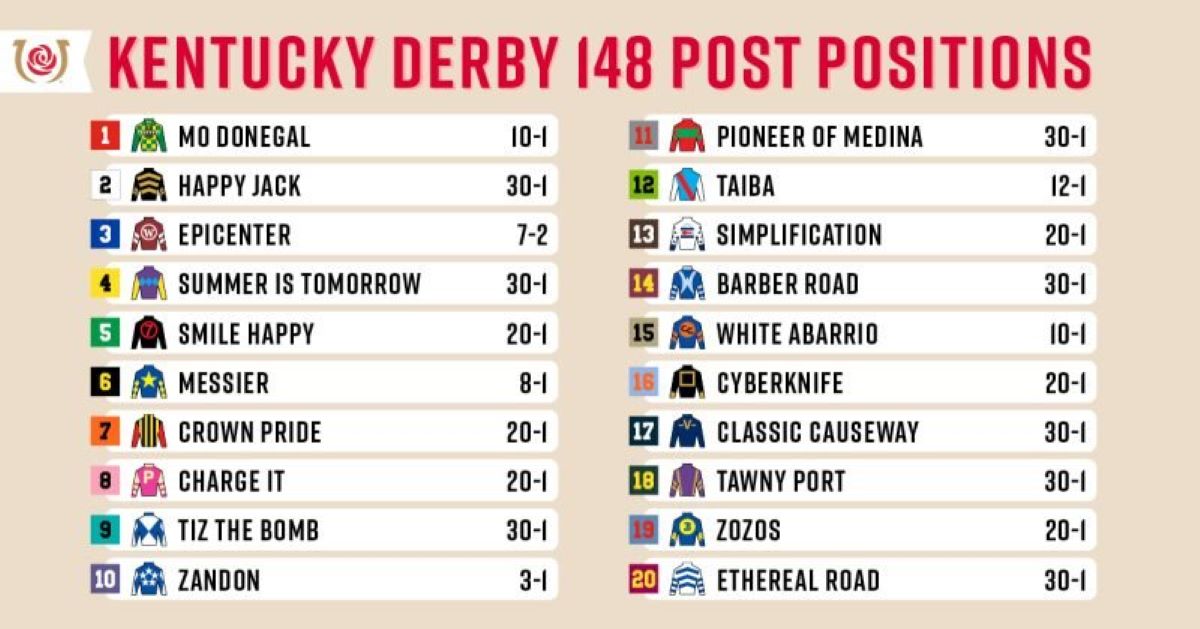 Brown’s Zandon drew Post 10 when the post positions were drawn Monday morning. The Grade 1 Blue Grass Stakes winner will have Flavien Prat aboard again. Prat guided the closer to that Blue Grass Stakes victory from 10th place on the backstretch.

“Perfect. We’re ready to go,” Brown said about the position.

As for Asmussen, the winningest trainer in North American history doesn’t lack for much in terms of accomplishments or accolades — except a Derby. But Epicenter, who won three of Fair Grounds’ four Derby preps: the Gun Runner, Risen Star and Louisiana Derby, provides one of his best opportunities to rectify that oversight. He’ll do that from Post 3 with Eclipse Award-winning rider Joel Rosario in the irons.

“Like any race, you want to get away nicely from the gate and go from there. How long he stands in there, how long it takes to load, 150,000 people staring at him — it’s a lot,” Asmussen said. “Joel is very confident in (the) rhythm of the horse. So, if he is away cleanly, Joel will let him be who he is.”

Vegas climbs aboard the Zandon bandwagon

Circa Sports revised its Derby future board after Monday’s draw, making Zandon and Epicenter co-favorites at 9/2. Epicenter spent much of the late spring as the book’s future favorite.

Tim Yakteen, who saddles Messier and Taiba, the horses formerly trained by Bob Baffert, liked where he wound up with both. Messier, the 8/1 third choice drew Post 6 with three-time Derby winner John Velazquez in the irons. The Santa Anita Derby winner who makes only his third career start, Taiba (12/1) drew Post 12 with two-time Derby winner Mike Smith aboard.

This is the 57-year-old Yakteen’s first Derby in charge, so he could be excuse for joking about the fact Messier and Taiba were two of the last three chosen.

One who didn’t was Mo Donegal, the fourth favorite at 10/1. For the second year in a row, one of trainer Todd Pletcher’s charges drew the dreaded rail. Pletcher’s other two choices: Charge It (Post 8-20/1) and Pioneer of Medina (Post 11-30/1) caught better luck.

Pioneer of Medina got into the Derby Sunday, after Brown confirmed Early Voting would not run the Derby.

As he did with Known Agenda last year, Pletcher sought to put a better face on Mo Donegal’s post. The Wood Memorial and Remsen champion did win the Wood from the rail and Pletcher pointed out the rail’s position further out isn’t the kiss of death it once was. Still, nobody has won the Derby from the rail since Ferdinand in 1986.

“I think the new gate should work to Mo Donegal’s advantage,” Pletcher said. “He’s got some experience in there; he just won the Wood Memorial from the one hole. He’s used to having dirt in his face and I’d hope that Irad (Ortiz Jr.) could save some ground around that first turn and get us in a good spot. He’s one of the few horses in my barn that I think could handle a spot like that.”

“Everything’s good so far, we like our post,” trainer Saffie Joseph Jr. said. “We’re very thankful for where we drew.”

So was Brad Cox, who finds his three Derby contenders: Cyberknife, Tawny Port and Zozos all on the outer edge of the field. The Arkansas Derby winner, Cyberknife (16/1) is in Post 16. Tawny Port (30/1) is two doors down in Post 18. And Zozos (20/1) is next door to his stablemate in Post 19.

“I’m happy with all three draws,” Cox said. “I think with the Derby starting at the head of the stretch, and a quarter of a mile to the first turn, they’ll be able to get into position.”

Appropriately, Ethereal Road (30/1) finds himself in Post 20. He was the 20th and last horse in the field. Hall of Fame trainer D. Wayne Lukas’ charge got in Monday when Un Ojo withdrew due to a bone bruise suffered during a Sunday workout.