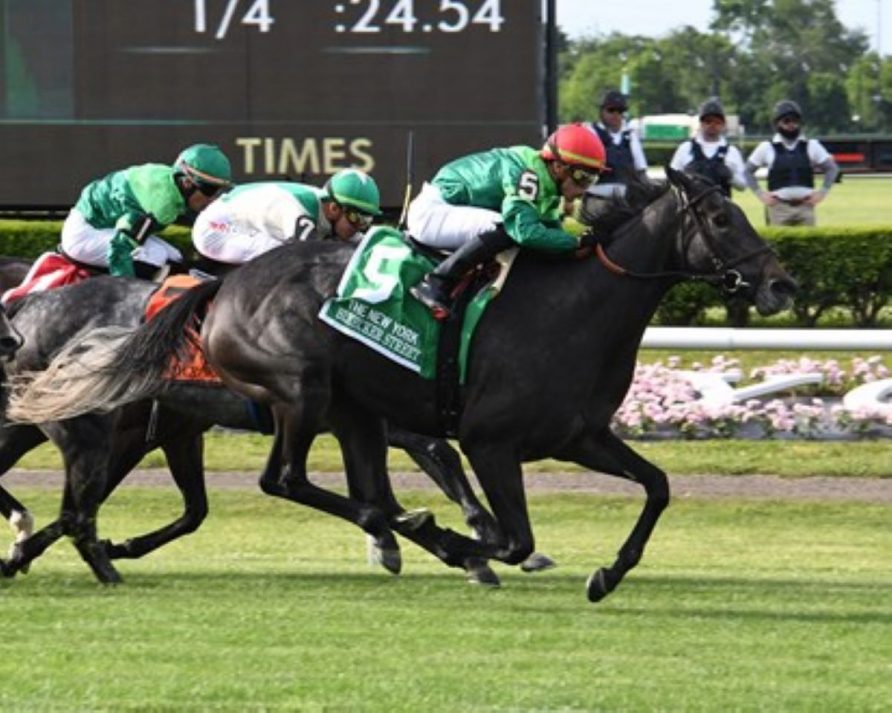 The Diana Stakes are the first of 19 Grade 1 stakes at Saratoga and it’s clear that Chad Brown is wasting no time playing for keeps in defense of his Saratoga training title. 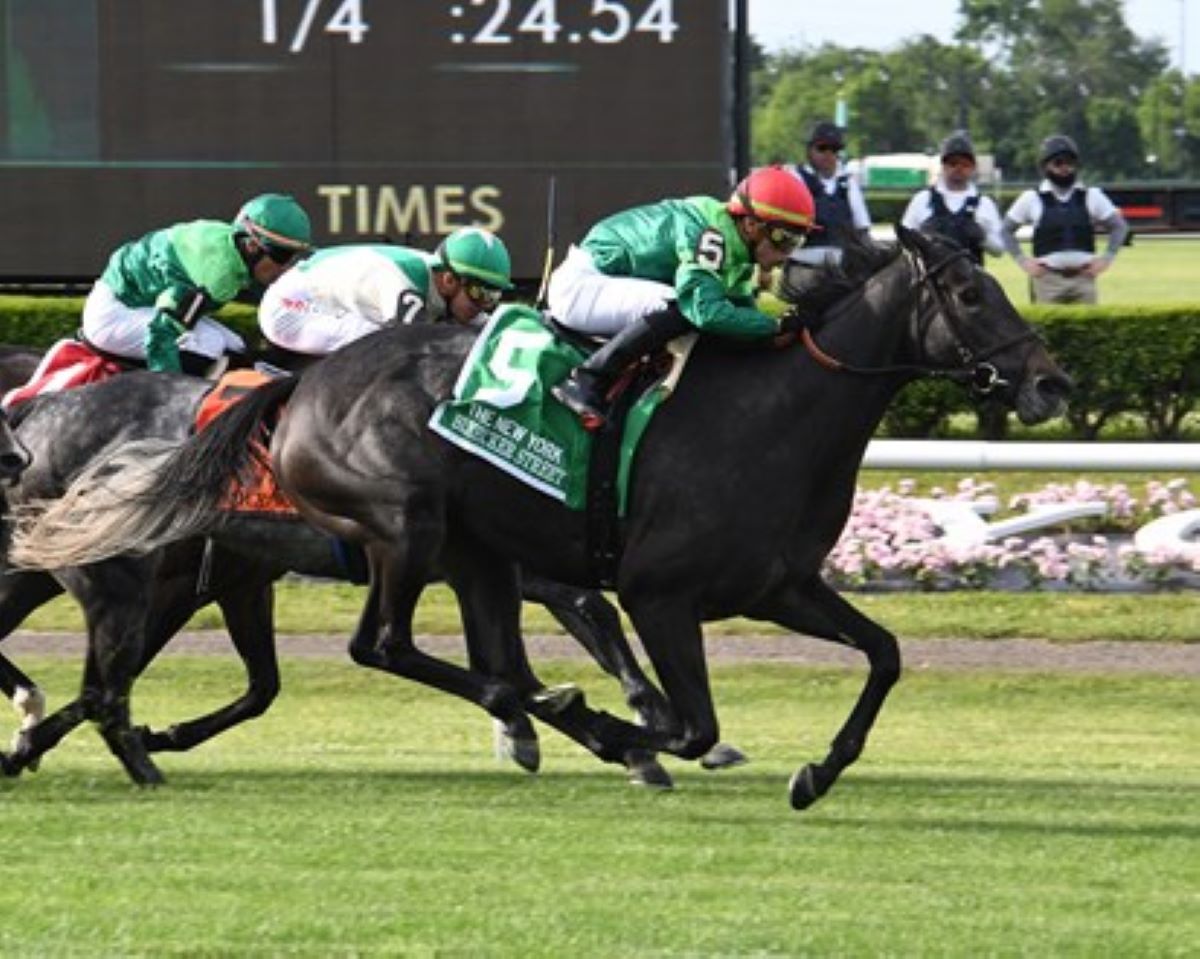 Bleecker Street, one of four Chad Brown entries, comes into the Grade 1 Diana Stakes at Saratoga perfect in seven races. Included in that was this victory in the Grade 1 New York at Belmont Park. (Image: Coglianese Photos/Susie Raisher)

Brown is flooding the Diana zone. He’s sending four of the six 4-year-olds and up into the gate for the 1 1/8-mile turf trek. Of course, the fact the Mechanicville, NY native made the Diana one of his foundation races over the years, makes this almost normal. He has sent at least two fillies into the Diana field every year since 2013.

“It’s been a race we’ve focused on for many years now since I opened my own stable,” Brown told the New York Racing Association. “Once again, we have horses that belong in the race.”

He has a better than 4-in-6 chance to win his seventh Diana title and first since Rushing Fall two years ago. That was the last of four consecutive Diana titles Brown claimed, ending a run begun by Lady Eli (2017) and extended by Sistercharlie (2018-19).

Bleecker Street one busy throughfare of a horse

That’s because one of his four fillies is undefeated Bleecker Street, the — for now — 6/5 favorite. Don’t be surprised if the Quality Road 4-year-old is odds-on by post time.

That’s after casual bettors take a look at her 7-for-7 record, speed figures increasing with every start, and throw money at her. Bleecker Street’s perfect record reflects a 5-for-5 2022 season to date. Four of those wins came in graded stakes, including her last-out half-length victory in the Grade 1 New York June 10 at Belmont Park.

That came with a career-best 96 Beyer Speed Figure for the 10 furlongs. It also came with rave reviews from Brown.

Bred for dirt, bold on grass

“She’s developed beyond anyone’s expectations, even mine,” he said. “Every time I’ve asked her to do something, she’s stepped up and done it. Every single one of her races has been a new challenge for her, and no matter the competition, distance or type of turf she’s on at various racetracks, she keeps meeting the challenges.

“She runs faster numbers each time and is slowly getting better and stronger. You can’t start your career any better than that, especially on turf, where you’re so trip dependent and weather dependent. For her to start off winning seven straight is just remarkable.”

Originally, Brown thought Bleecker Street was bound for dirt, given her pedigree. She came out of the Lemon Drop Kid mare Lemon Liqueur, who was stakes-placed on dirt. But Brown said she never took to dirt in training, so he turned her loose on turf in August 2021 at Monmouth Park.

Bleecker Street loves her some Florida

That produced a half-length victory. Two months later, she captured an allowance race at The Meadowlands before Brown shut her down for the rest of 2021. He brought her and her lethal finishing kick back for an allowance win at Tampa Bay Downs. That was the first of Bleecker Street’s three wins on that track. She added the Grade 3 Endeavor and Grade 3 Hillsborough later that winter.

“When I took her down to Florida, she really started to blossom, and it became clear to me that this was a graded stakes level filly,” Brown said. “It conformed for me that she needs to be on track to run in Grade 1s because she had developed that much. As horses get older and change, they can go one way or another, and she went the right way.”

That’s largely because Bleecker Street’s lightning late kick answers for any pace. She came from seventh entering the stretch in May’s Grade 3 Modesty Stakes at Churchill Downs two starts ago. And yet, she won by a half-length.

As Bleecker Street goes for her eighth consecutive victory, jockey Irad Ortiz Jr. goes for his ninth Grade 1 title of 2022 in the irons.

Brown sends his Diana charges out in waves

Oh yeah. Brown’s got more where that came from, starting with French-bred Rougir (3/1). After making her first 13 starts in Europe, she came to Brown’s barn last November. That move came after Rougir finished seventh in the Breeders’ Cup Filly and Mare Turf.

Peter Brant, Rougir’s owner, bought her out of the Arquana December Breeding Stock Sale for $3.4 million and sent her to Brown. She acclimated herself well, winning the Grade 3 Beaugay at Belmont Park in May. But a month later, finished a flat fifth in the New York.

“I put the pieces together that maybe she needed a little time from the Beaugay and I’m hopeful that’s the case,” Brown said.

There are closers — and here’s the early Diana speed

Bleecker Street and Rougir are Brown’s closers. His other two Diana entries: Technical Analysis (3/1) and In Italian (6/1) are his front-runners. Technical Analysis is undefeated in two Spa visits, winning the Grade 3 Lake George and Grade 2 Lake Placid last year.

She comes in off winning the Grade 3 Gallorette May 21 at Pimlico, a victory that came with a career-best 96 Beyer. Technical Analysis has been on or near the lead in each of her last five races.

Another Brant horse, In Italian hasn’t missed the board in six career starts (3-2-1). Two of those victories came this year: in a Tampa Bay Downs allowance and the Grade 3 Honey Fox at Gulfstream.

In Italian shows amore toward board finishes

The front-running Dubawi filly finished second to stablemate Speak of the Devil in the Grade 2 Turf Mile on the Kentucky Derby undercard, then third in the Grade 1 Just A Game on the Belmont Stakes undercard.

“I have to give both horses the opportunity to run. In Italian seems to be a faster horse than Technical Analysis. We’ll see how it shakes out when they break,” Brown said.

It’s hard for A-list trainer Charlie Appleby to be an afterthought in any race, especially one he went 1-2 in last year with Althiqa and Summer Romance. But here we are and here’s Appleby, sending out Creative Flair (8/1). The Irish-bred Dubawi filly scored last out in the Balanchine at Meydan Racecourse in February.

“She’s strengthened, really. She’s filled out a little bit more. She was lighter framed last year and now she’s filled out and blossomed,” he said. “The team is very happy with her and she’s traveled up to Saratoga in good fettle.”