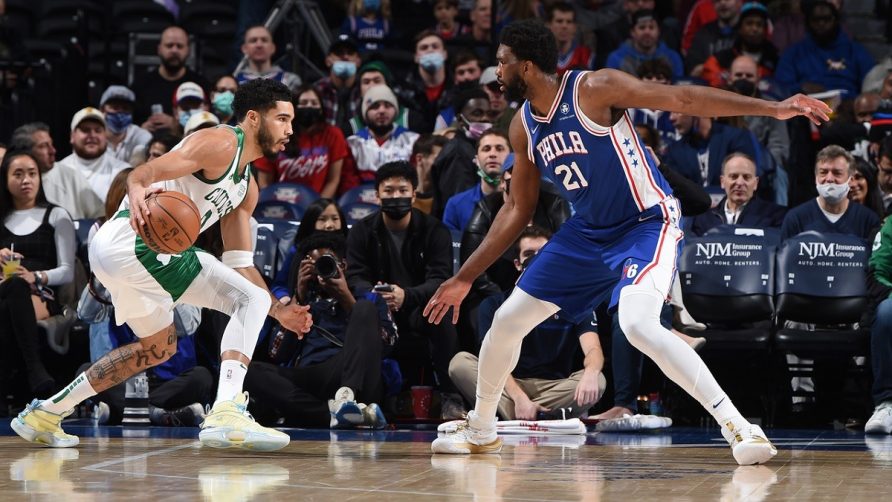 With a couple of days remaining in the regular season, the Atlantic Division is still up for grabs with the Boston Celtics the current betting favorite at -140 odds, and the Philadelphia 76ers trying to catch them at +110 odds. 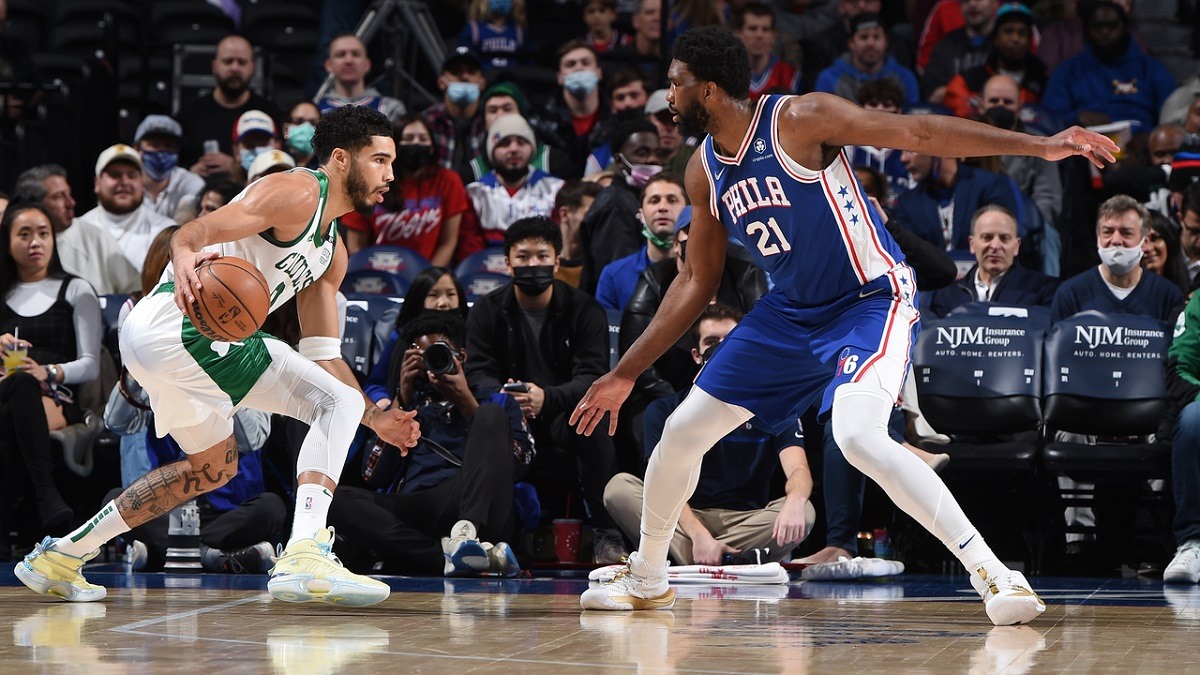 Jayson Tatum from the Boston Celtics is defended by Joel Embiid of the Philadelphia 76ers, but both teams are in a tough fight for the Atlantic Division title.

Prior to the start of the season, the Brooklyn Nets were the huge favorite at -380 odds. The 76ers were their closest competitor at +360, while the Celtics were third on the futures board at +1000 odds.

The Nets struggled all season, and it was only just recently where Kyrie Irving could play home games. They also traded an unhappy James Harden to the 76ers at the trade deadline in exchange for disgruntled point guard Ben Simmons. However, Simmons has yet to suit up for the Nets.

The Celtics were slow starters. They stumbled out of the gate with a 2-5 record, but became the second team in the Eastern Conference to win 50 games. The team has been on a blistering heater since late January when they went 27-6. Over their last 20 games, the Celtics went 16-4.

Defense has been the key to success. The Celtics are at the top of all the statistical categories. Scoring defense. Check. Opposing field goal percentage. Check. 3-point defense. Check. Even the stat geeks are drooling over defensive efficiency and other obscure advanced metrics. Double check.

Marcus Smart is the leading candidate to win the 2022 NBA Defensive Player of the Year. His teammate, Robert Williams III, was also on the shortlist, but the big men recently injured his knee.

Jayson Tatum is also having a phenomenal second-half of the season. He was unstoppable in March averaged 32.8 ppg and shooting 44.7% from 3-point range.

The Celtics are on the road for their final two games of the season against two excellent squads with a three-game winning streak and the division title on the line. Tonight, the Celtics play the tail-end of back-to-back games versus the Milwaukee Bucks. On Sunday, the Celtics head to Memphis to play the Grizzlies. Both of their opponents do not have anything to play for, so you could expect them to rest their starters.

At this point, the Atlantic Division title is in the hands of the Celtics because they hold a tiebreaker, which is why they’re the favorite at -140 odds. The Celtics seek their first divisional title since 2017, and only their second Atlantic crown in the last decade when they won five straight titles between 2008 and 2012.

Joel Embiid is in a super tight race — one of the closest in NBA history — against the reining MVP Nikola Jokic, but Jokic edged out Embiid in an ESPN straw poll last week. Embiid has been trying to court favor with any undecided voters with his performance over the last few games. He’s averaging 39.3 ppg and 14.7 rebounds in April and scored 44 points against the Cavs on Sunday and lit up the Pacers for 45 points on Tuesday.

The 76ers have three games remaining, but two are against teams that have been tanking. They face the Toronto Raptors tonight in Canada, but then host back-to-back games in Philly against the Indiana Pacers on Saturday, then the Detroit Pistons on Sunday.

The 76ers were out in front in the Atlantic Division race, until they dropped three games in a row at the end of March. They bounced back and won three straight, but find themselves a half-game behind the Celtics. Tonight is a must-win situation for the 76ers. If they can defeat the Raptors, then they’ll reach the 50-win mark and be in a good position to snatch the division title away from the Celtics. If they can run the table and win their remaining three games and if the Celtics lose one of their final two, then the 76ers can snag the Atlantic crown.

You can back the 76ers at +110 odds to win back-to-back Atlantic Division titles.