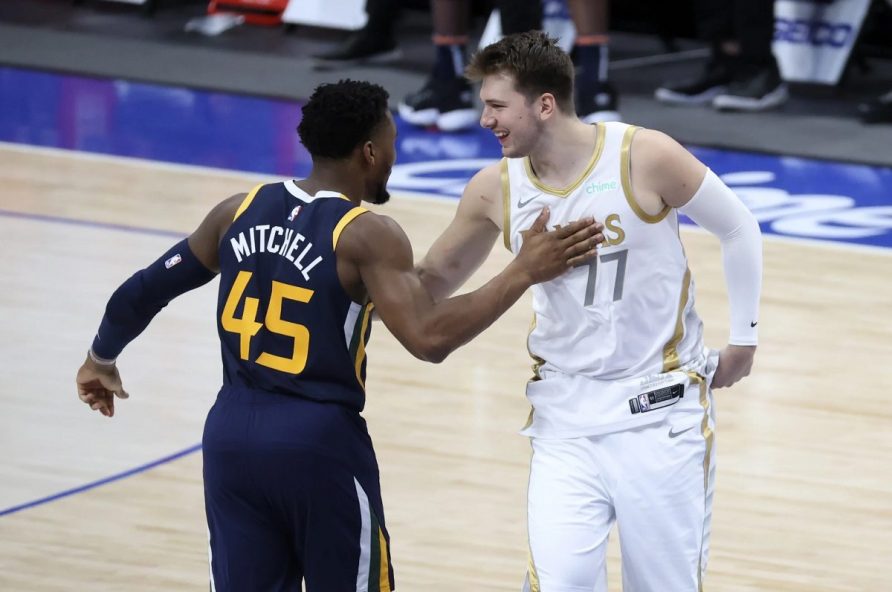 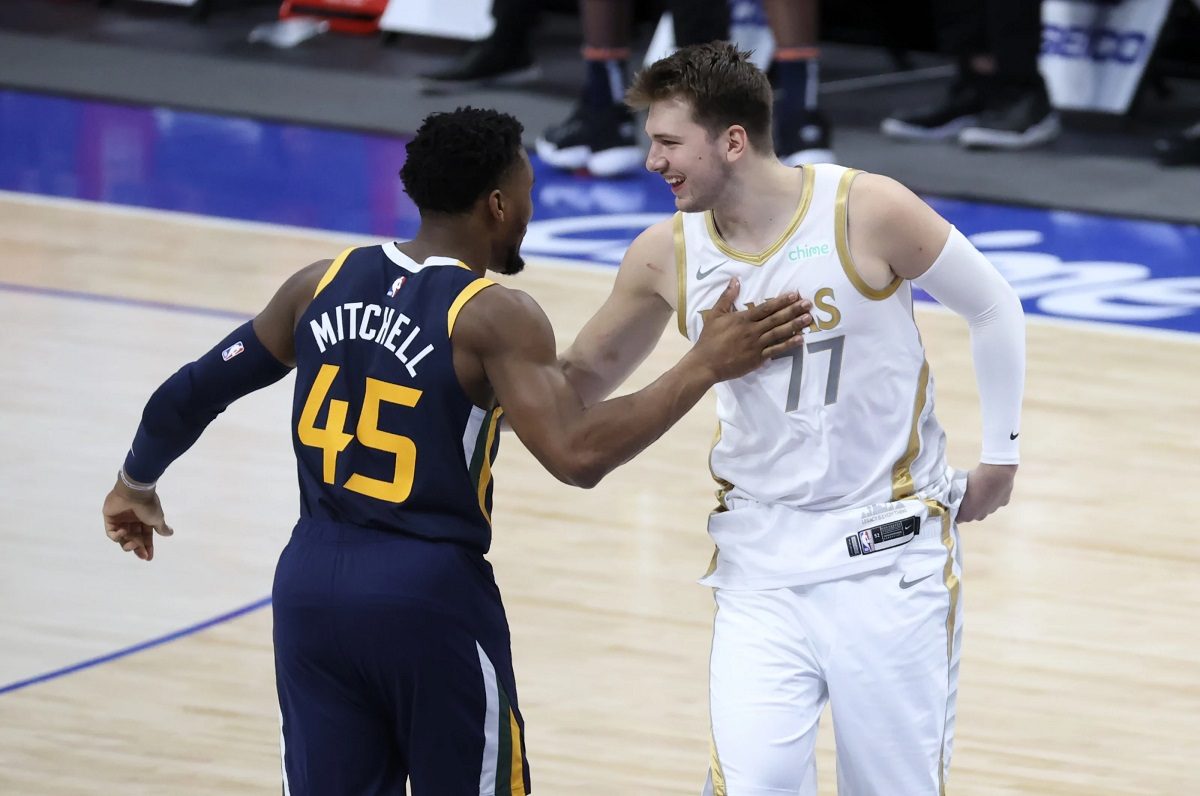 Donovan Mitchell from the Utah Jazz and Luka Doncic from the Dallas Mavs prior to the opening tip earlier this season. (Image: Getty)

Game 1 initially opened with the Mavs a -2.5 favorite, but moved to Mavs a +5 home dogs after the Mavs said Doncic would miss Game 1 with a left calf strain.

Both these teams split the regular season series at 2-2.

Word on the street is that Doncic will miss the first two games of the first round, but the Mavs are being tight-lipped on the severity of the injury. Even if Doncic returns for Game 2, calf injuries are tough and can easily reaggravate, or slow him down.

Doncic nearly averages a triple-double with 28.4 points, 9.1 rebounds, and 87 assists per game. He’s been a one-man band ever since the Mavs traded Kristaps Porzingis to the Washington Wizards. It’s now time for Jalen Brunson and backup point guard Spencer Dinwiddie to shine.

Brunson finished the season as the second-best scorer on the Mavs averaging 16.3 ppg, and shooting 37.3% from 3-point range. Dinwiddie looked great since joining the Mavs after the Unicorn trade. In 23 games with the Mavs, Dinwiddie averaged 15.8 points and 3.9 assist per game.

The Mavs need to make up 30 points in offense without Doncic, so that means Dorian Finney-Smith and Reggie Bullock have an opportunity to step up.

If Doncic misses just one game, then the Mavs could win this series in six or seven games. If he misses three or more, the Jazz could sweep.

Winning teams tend to put aside their difference, but it’s easy to see the cracks when you’re losing. The Jazz stumbled into the playoffs after an awful second half to the season. The team is on the verge of self destructing due to an ongoing rift between Donovan Mitchell and Rudy Gobert. But let’s be honest, most of the team has a frosty relationship with Gobert. Everyone tolerated his combative and feisty personality when they were winning, but these days, everyone has grown tired of Gobert’s antics.

There’s numerous rumors that the Jazz will break up their squad and trade Mitchell to the Knicks, and then deal Gobert to the Atlanta Hawks. Head coach Quin Snyder has been on the short list of candidates to become the next head coach of the Lakers, and he’s also at the top of the list of potential replacements if Gregg Popovich retires.

Heading into the playoffs, it seemed like the Jazz would be first-round knockout material. However, after Doncic hurt his calf, even a fragmented Jazz squad should be able to beat the Mavs. And if they cannot defeat a Luka-less Mavs team, then the Jazz deserved to be gutted.

Mitchell (25.9 ppg) is one of the most explosive scorers in the league, and he’s had moments of purse volcanic eruption in the postseason like the 57-point game against the Denver Nuggets in 2020. It would be fun to see Playoff Spida go off one last time with the Jazz.