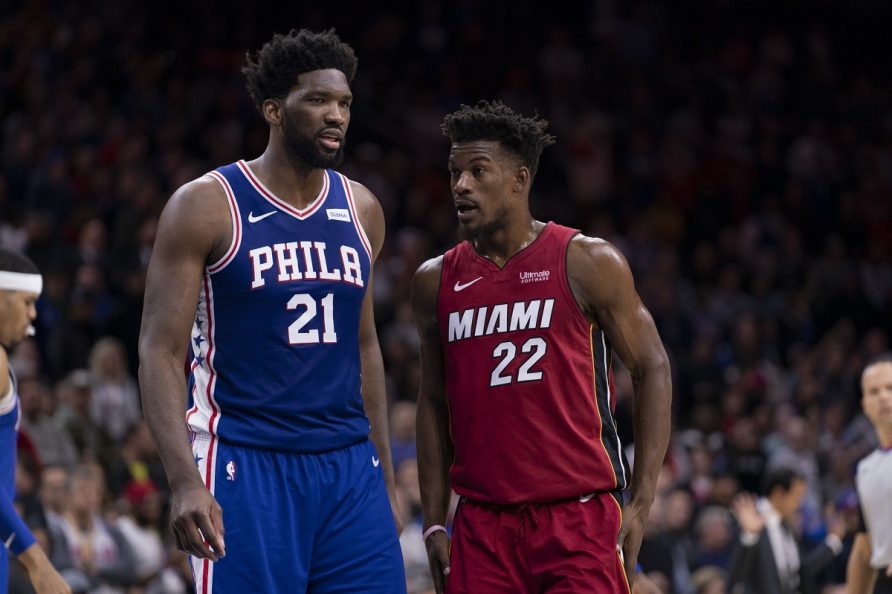 The #1 Miami Heat battle the banged-up #4 Philadelphia 76ers in the Eastern Conference Semifinals, but the Heat are huge favorites to win the series at -350 odds. 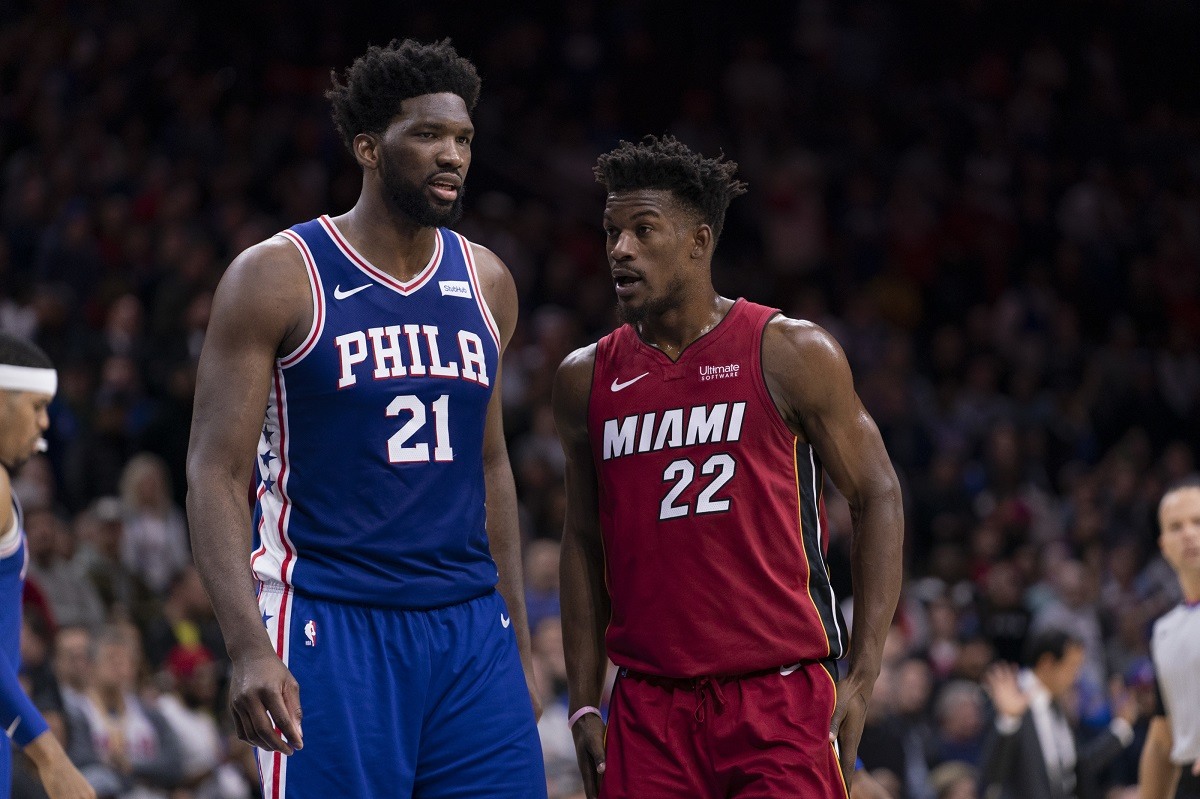 Joel Embiid from the Philadelphia 76ers hears a little trash talk from Jimmy Butler of the Miami Heat during the regular season, but Embiid is out the first two games of their postseason series. (Image: Mitchell Leff/Getty)

The Heat secured the #1 seed during a tight race for the top seed in the last month of the season. Four teams were jockeying for the #1 seed and home-court advantage in the playoffs, but the Heat were able to hold everyone off including the 76ers.

The 76ers are underdogs to upset the Heat and win the series at +270 odds. The 7ers are also the long shot on DraftKings’ futures board at +2500 odds to win the title.

Heat Prime Directive: Win It All

The Miami Heat didn’t break much of a sweat when they picked off the #8 Atlanta Hawks in five games. They shut down Trae Young, who was unable to lead the Hawks back to the East Finals after last postseason’s magical run.

The Heat incurred a minor setback when they lost Kyle Lowry to a hamstring injury, Lowry will not play in Game 1, but backup Gabe Vincent is ready to step into the starting lineup. The Heat also have a secret weapon with Victor Oladipo. He missed significant time the last few seasons with injuries, and provides an extra scoring boost, but the Heat might not need it in this series against the short-handed 76ers.

“Whenever you’re dealing with a team that has to change a little bit, that immediately gets them a built-in sense of urgency,” said head coach Erik Spoelstra. “But again, what we’re trying to accomplish, it is so difficult. When you approach it that way, that just puts you there to compete at a high level, the necessary level that is going to be required.”

A tenacious Butler led the Heat to a berth in the 2020 NBA Finals, but ran out of gas against LeBron James and the eventual champion LA Lakers. The Heat might’ve been ahead of schedule inside the NBA Bubble, but two seasons later, expectations are high. Bettors might’ve overlooked the Heat all season, and during this year’s playoffs, but the Heat have their eye on the ultimate prize — an NBA championship.

The Philadelphia 76ers knew they had a tough task ahead of them with a semifinals battle against the Miami Heat, but that was at full strength. After Joel Embiid went down, the 76ers face an arduous task trying to stay competitive without an MVP candidate. Embiid suffered an orbital fracture and concussion in Game 6 of the first round series against the Toronto Raptors.

Embiid is currently in concussion protocol, but over the weekend, he was initially listed as out indefinitely with the orbital fracture. On Monday, the 76ers hinted that Embiid could play against the Heat in Game 3 or Game 4 when the series shifts from Miami to Philadelphia. He did not travel with the team to South Florida, so there’s zero chance he suits up in the first two games.

Without Embiid, the 76ers went 6-8 this season. Backup Paul Reed will see some extended action, but it’s all hands on deck against the Heat.

“The biggest adjustment is we don’t have Joel,” said Rivers. “There’s no good thing to it. They don’t care who we have on the floor.”

“It’s always adapting and figure out how the other teams is playing, what they’re taking away, what they’re allowing, and for us to capitalize in that regard,” said Tobias Harris.

The 76ers added James Harden at the trade deadline after they finally shipped out disgruntled point guard Ben Simmons. All eyes will be on Harden to pick up the scoring slack after the 76ers lost the NBA’s leading scorer. Embiid averaged 30.6 points and 11.7 rebounds this season. His PER rating of 31.24 was ranked #3 overall.