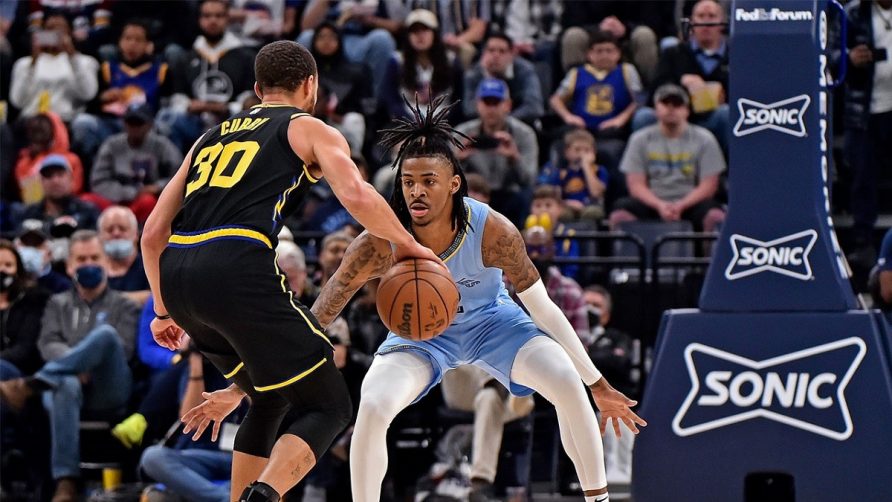 Ja Morant and the high-octane, yet young #2 Memphis Grizzlies meet Steph Curry and #3 Golden State Warriors in the Western Conference Semifinals. Oddsmakers pegged the Warriors as the favorite to win the series at -265 odds against the Grizzlies. 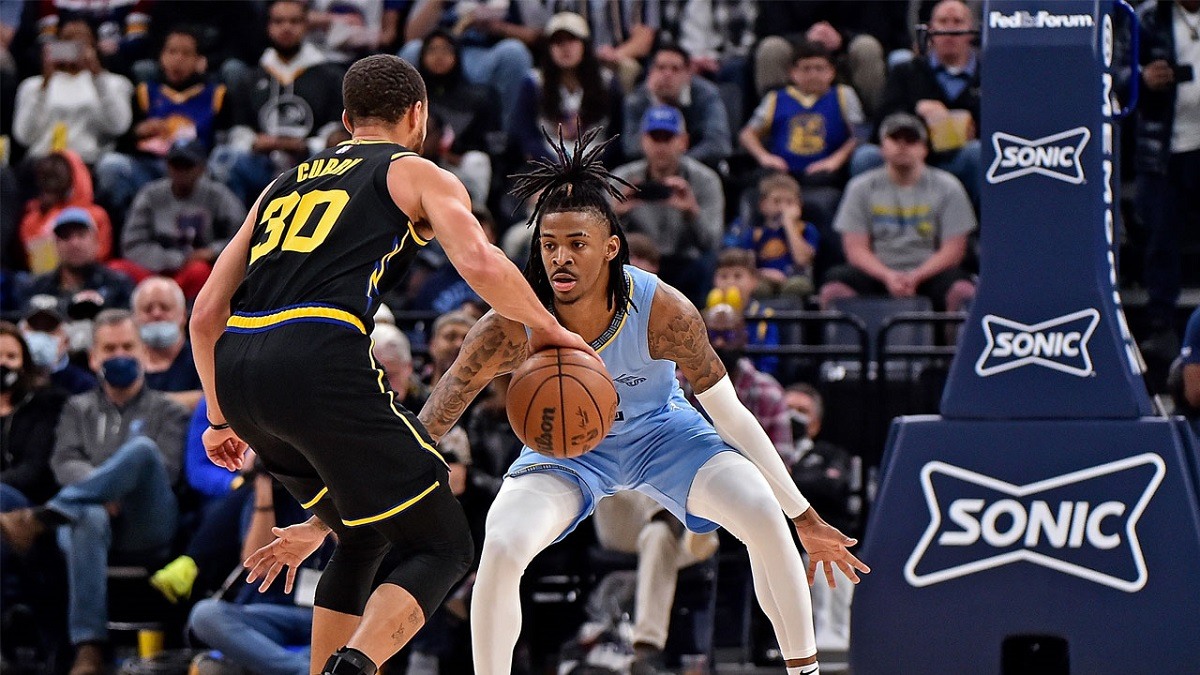 Ja Morant from the Memphis Grizzlies defends Steph Curry of the Golden State Warriors during the regular seasons, but the two meet in an exciting second-round series in the 2022 Playoffs. (Image: Getty)

During the regular season series, the Grizzlies were 3-1 against the Warriors.

The Warriors are +300 odds win the 2022 NBA championship as the second-best team on the futures board at DraftKings. The Grizzlies are one of the long shots to win the title at +1300 odds.

Young Griz Ready for a Shootout

The Grizzlies bailed themselves out of multiple slow starts against the Minnesota Timberwolves in the first round. They became the first team in NBA history to erase multiple double-digit deficits in the fourth quarter of a playoff game and pull off a victory. The Grizzlies did it three times, including the series clincher in Game 6.

After the Timberwolves gave the Grizzlies a little bit of a scare, the Grizzlies now get a chance to play against an established group of veterans like the Golden State Warriors. Morant leads an exciting backcourt that includes Desmond Bane, or the best player you’re not aware about. The Morant/Bane battle against the Splash Brothers — Curry and Klay Thomson — will be must-see TV. Bane made some huge buckets in the first round while leading the Grizzlies in scoring with 23.2 ppg and a sizzling 49.1% from 3-point range.

“We feel like we are one of the best backcourts in the league as well,” said Morant. “So, going into any matchup, we’re taking ourselves over anybody. We’re very confident. We put in the work.”

Against the Timberwolves, Morant averaged 21.5 points, 10.5 assists, 8.7 rebounds, and 1.5 steals per game. Dillon Brooks added 16.5 ppg, while Brandon Clarke provided a huge boost off the bench averaging 16.5 points and 9.0 rebounds per game. Big man Steve Adams fell out of the rotation because Clarke played so well. Adams is currently out due to COVID-19 and will not play in Game 1.

Death Lineup and the Return of the Splash Brothers

Curry missed the last couple weeks of the regular season with a foot injury. Curry came off the bench at the start of the first-round series against the Denver Nuggets, while the Warriors steadily increased his playing time. Whenever Curry (28 ppg) stepped onto the floor against Denver, fans were treated with a glimpse of the Death Lineup that also includes Thompson (22.6 ppg), Draymond Green, Jordan Pool (21 ppg), and Andrew Wiggins (14 ppg).

“Now that we are finally nearly whole, it’s such a great playoffs again and we look forward to the next round,” said Thompson.

The Grizzlies will be tasked with slowing down the Death Lineup, which includes the addition of Jordan Poole, who caught his first real glimpse of the postseason in the opening round.

“We’ve been around the block, and we’re trying to get back to the mountaintop and understand the opportunity in front of us,” said Curry.

The Warriors start the series on the road against the Grizzlies with Game 1 and Game 2 in Memphis. They’d love to steal a win on the road before the series shifts to San Francisco for Game 3 and Game 4 next weekend.

The Warriors secured their seventh trip to the Western Conference Semifinals in the last ten seasons. They’ll have to pick off the new kids on the block if they want to return to their championship glory. At the same time, the Grizzlies know they have a chance to establish themselves as legitimate championship contenders by sticking it to the Splash Brothers.